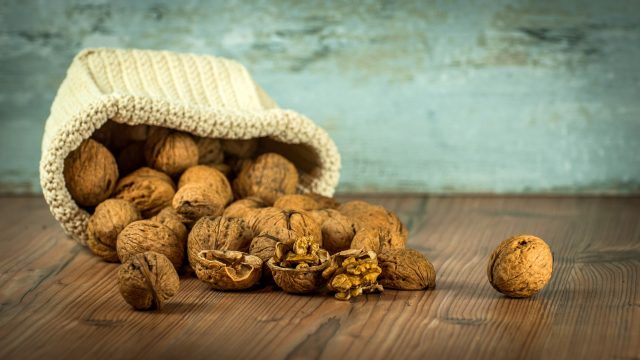 Walnuts may not just be a tasty snack, they may also promote good-for-your-gut bacteria.

New research suggests that these “good” bacteria could be contributing to the heart-health benefits of walnuts.

In a randomized, controlled trial, researchers found that eating walnuts daily as part of a healthy diet was associated with increases in certain bacteria that can help promote health.

Additionally, those changes in gut bacteria were associated with improvements in some risk factors for heart disease.

Kristina Petersen, assistant research professor at Penn State, said the study — recently published in The Journal of Nutrition — suggests walnuts may be a heart- and gut-healthy snack.

For the study, the researchers recruited 42 participants with overweight or obesity who were between the ages of 30 and 65.

Before the study began, participants were placed on an average American diet for two weeks.

After this “run-in” diet, the participants were randomly assigned to one of three study diets, all of which included less saturated fat than the run-in diet.

In all three diets, walnuts or vegetable oils replaced saturated fat, and all participants followed each diet for six weeks with a break between diet periods.

To analyze the bacteria in the gastrointestinal tract, the researchers collected fecal samples 72 hours before the participants finished the run-in diet and each of the three study diet periods.

“The walnut diet enriched a number of gut bacteria that have been associated with health benefits in the past,” Petersen said.

“One of those is Roseburia, which has been associated with protection of the gut lining. We also saw enrichment in Eubacteria eligens and Butyricicoccus.”

The researchers also found that after the walnut diet, there were significant associations between changes in gut bacteria and risk factors for heart disease.

There were no significant correlations between enriched bacteria and heart-disease risk factors after the other two diets.