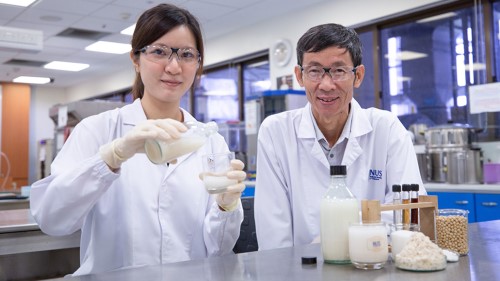 Okara is the residue from the production of soy milk and tofu, and is usually discarded.

Created using a patented zero-waste process, the beverage can be stored at room temperature for up to six weeks and still retain high counts of live probiotics to better deliver health effects.

This is unlike commercially available probiotic drinks which are mainly dairy-based and require refrigeration to maintain their levels of live probiotics.

These beverages also have an average shelf-life of four weeks, and do not contain free isoflavones.

“Okara has an unpleasant smell and taste – it smells fishy, tastes bland, and has a gritty mouthfeel,” said project supervisor associate professor Liu.

“Our breakthrough lies in our unique combination of enzymes, probiotics and yeast that work together to make okara less gritty, and give it a fruity aroma while keeping the probiotics alive.”

“Our final product offers a nutritious, non-dairy alternative that is eco-friendly.”

About 10,000 tons of okara are produced yearly in Singapore.

As it turns bad easily, causing it to give out an unpleasant smell and a sour taste, okara is usually discarded by soy food producers as food waste.

The idea of using fermentation to produce a drink from okara was first conceived by Vong.

She recounted, “Fermented soy products, such as soybean paste and miso, are common in Asian food culture.”

“When I was young, my grandparents explained to me how these fermented foods are made.”

“The fermentation process was like magic to me – it transforms bland food into something delicious.”

“During my undergraduate studies at NUS, I worked on a project to examine how soy milk can be infused into different food items, and I realized that a huge amount of okara was being discarded,” she added.

“It occurred to me that fermentation can be one good way to convert unwanted okara into something that is nutritious and tastes good.”

Under the guidance of associate professor Liu, Vong took a year to devise a novel recipe that converts okara into a beverage that is fruity and refreshing.

She experimented with 10 yeasts and four enzymes before coming up with an ideal combination.

The final recipe uses the probiotic strain Lactobacillus paracasei L26, the Viscozyme L enzyme and the Lindnera saturnus NCYC 22 yeast to convert the okara into a nutritious drink that achieves a minimum of one billion probiotics per serving, which is the current recommendation by the International Scientific Association for Probiotics and Prebiotics to achieve maximum health benefits.

The drink, which takes about one and a half days to produce, also contains free isoflavones, which are naturally occurring antioxidants that maintain cardiovascular health, as well as dietary fiber and amino acids.

The NUS researchers have filed a patent for their novel technique, and are currently experimenting with different enzymes and microorganisms to refine their recipe.

They are also looking to collaborate with industry partners to introduce the drink to consumers.