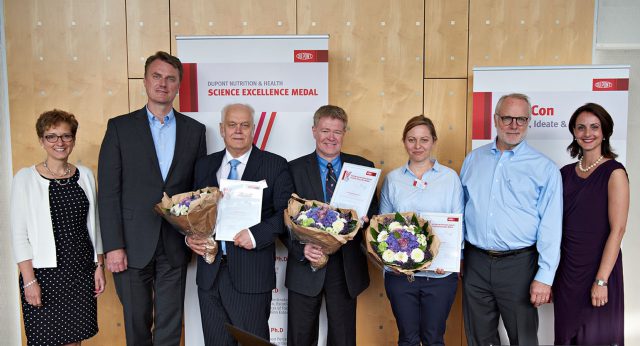 The Danisco Foundation has awarded three Science Excellence Medals for 2017 to senior scientists broadly recognized by DuPont Nutrition & Health for scientific excellence with a remarkable record of accomplishment relevant to the food and nutrition industry.

The recipients and their research are:

This includes characterization of phages, their evolution in the industrial dairy environment and detailed mechanisms involved in the infection process.

Complementary to the phage biology, his laboratory researches bacterial host-phage resistance mechanisms that counter virulent phages which has direct application toward our dairy starter strain development.

He is focused on developing sophisticated software to control and on-line monitor fermentation processes, as well as high-level modelling of the cells.

Ohla aims to unravel the psychophysiological mechanisms underlying the perception and preference of food objects with a focus on the brain mechanisms of the sensory processes involved, particularly gustation, olfaction and vision.

She also wishes to focus on cross-modal and multisensory interactions, as well as modulations by attention and prior experience as well as physiological states.

“Therefore, it is a great honor to be able to award the Science Excellence Medal to these three scientists in recognition of their significant accomplishments and the contribution each of them has made to the field of food and nutrition.”

The award, formerly known as the Danisco Prize, was founded in 2002 by the Danisco Foundation to help improve food products, notably industrially produced foods.

The Danisco Foundation was established in 1981 and provides funding and grants to support predominantly food science and research.