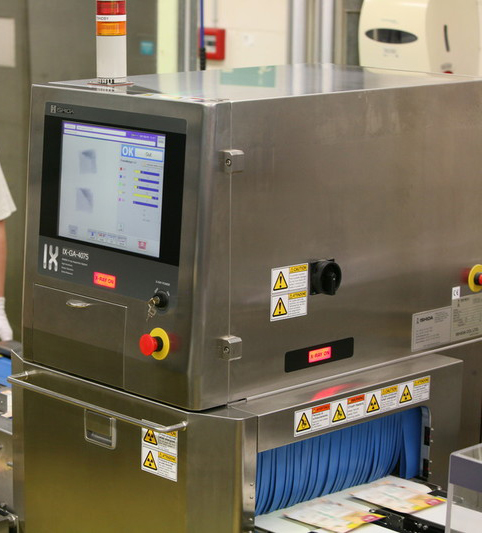 The 12-head linear weigher processes the soup ingredients at a speed of up to 170 weighments per minute with a weighing accuracy of 0.1 g.

The X-ray system uses Ishida’s patented Genetic Algorithm technology to detect foreign bodies with a very low density and as small as 0.5 mm.

HACO invested in the line for greater flexibility during end-of-line packing for creating shelf-ready transportation containers.

At the same time, the manufacturer also wanted to considerably increase output and ensure maximum availability.

However, the installation could only be done on extremely limited floor space and room height.

During filling, pasta or vegetable ingredients are mixed with a soup powder, with the fill weight of the ingredients between 10 g and 80 g.

The linear multihead weigher was specially developed for the high-performance handling of free-flowing products with small target weights.

Even the top-of-the range CCW-R-112P, which features 12 weighing heads, has extremely compact dimensions, which allowed it to be seamlessly integrated into the new line.

Soup ingredients such as pasta, croutons or peas are fed into the multihead weigher via two vibrating channels.

The feeder system then distributes the product evenly onto 12 vibratory feeder troughs, which transport it to the hoppers.

Loadcells and sensors are used to ensure that the product is fed consistently.

The 12 pool hoppers (used for weight stabilisation) are followed by 24 weigh hoppers, which provide tens of thousands of weight combinations to get as close as possible to the target weight.

Accurately weighed product is then released in a double dose via two discharge chutes into two sachets at a time, which are taken to a carousel.

The tilt angle of the chutes was specifically designed so that the ingredients drop into the sachets at maximum efficiency.
Due to a lack of space, the chutes on the filling system had to be staggered.

The asymmetric layout of the interface with the polybag machine also required software adaptations carried out by Itech AG.

As well as its speed and accuracy, the linear design of the CCW-R-112 ensures gentle product handling, with the low drop heights particularly beneficial for fragile ingredients like alphabet pasta shapes.

The machine has a fully enclosed hygienic design, which curbs the amount of dust that is generated and protects the lightweight product from air turbulence.

Product changes are carried out speedily by selecting from up to 200 pre-sets.

All feeder troughs and hoppers have quick-release mechanisms for tool-free removal and replacement.

Once the ingredients are in the bag, soup powder is added using auger fillers.

The sealed pre-printed bags are then conveyed for quality control in the Ishida X-ray, which is able to handle the commonly-used aluminium-coated bags.

Meanwhile, the Ishida IX-GA’s Genetic Algorithm technology, which uses image data analysis over a number of generations, was adapted to HACO’s requirements to check the product against potential foreign bodies including glass, metal, stone or plastic.

The sachets pass through the X-ray inspection system in two lanes at a belt speed of up to 60 m a minute.

In this particular application, faulty packs are not rejected using the standard methods of a swivel arm or a compressed air nozzle, because the flat bags are transported horizontally on the conveyor belt. Itech AG therefore designed a special retractable belt rejection mechanism.

If a contaminated sachet needs to be removed from the process, the conveyor belt quickly retracts at the outlet and the bag falls through a slit at the transfer point to the downstream conveyor belt.

The easy-to-use IX-GA features an automatic set-up function and is ready to operate within 90 seconds.

Adjustments can be made on the machine without interrupting production.

A data log collects valuable visual and numerical information to demonstrate that production and packing processes are properly and correctly performed.