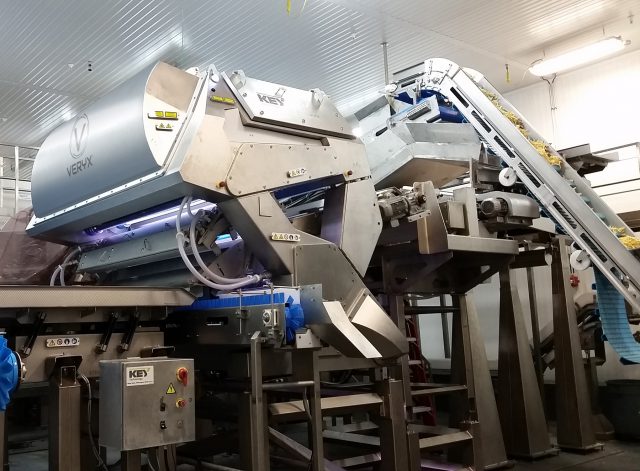 While Veryx targets all foreign material (FM) for removal, STG recognizes and categorizes every surface defect and the dimensional characteristics of every individual strip and makes each accept/reject decision based on how it will impact the aggregate ‘in the bag’ grade as defined by the processor.

By controlling the output for defect types that must be managed to a particular grade or ‘spec’, Veryx with STG accurately maintains the most complex final product specifications without operator intervention while increasing yields by one to three percent and enabling processors to eliminate mechanical length grading.

When the target grade permits a certain measure of minor defects to be present, a Veryx STG sorter will pass only the allowed amount of that defect type.

By controlling the quality of the output to a defined grade, STG ensures the final product specification is consistently met.

STG can profile the length of each potato strip as well as any surface defects that may appear on the potato strip.

Veryx with STG can be programmed to reject strips that are too short or too long for the grade while managing the distribution of strip lengths within multiple user-defined categories (length bins) between those two absolutes.

If the grade allows for a given percentage of all strips to be between X and Y in length, another percentage to be between Y and Z in length and so on, STG will make accept/reject decisions to deliver exactly the required length profile.

“Of course, the sorter removes FM and defects at the same time it is length-grading, which adds enormous value.”

“By eliminating mechanical graders, the processor reduces their capital costs and frees up floor space at the same time they remove a potential source of FM introduction and reduce maintenance and sanitation expense.”

“Also, operational versatility is significantly improved because a sorter’s length grading parameters are instantly managed on the user interface, without having to make mechanical adjustments.”

All sorters make accept/reject decisions by comparing the defect and/or the dimensions of each object to predetermined criteria.

Without STG, those decisions are made as a sequence of one-off decisions, regardless of final ‘in the bag’ quality results.

Historically, an operator has had to adjust the sorter’s accept/reject thresholds subjectively in an effort to make grade given inevitable fluctuations in the quality of incoming product.

This traditional approach to sorting can result in too many defects being rejected, creating significant yield loss and, when incoming defect loads spike, final grade specifications can be missed.

“Our powerful STG algorithms far surpass a human’s ability to manage the sorter.”

When Veryx is equipped with STG, sort recipes include the definitions and acceptable volumes of specific surface defects and the desired distribution of strip lengths for every customer grade specification.

This ensures consistent performance of the sort day in, day out and achieves repeatable results when running the same product on multiple lines using the same sort recipe.

It also enables an operator to switch to run a different grade at the touch of a button.

With Veryx, operator qualification requirements are dramatically reduced, allowing a minimally skilled operator to become a proficient user of the system in less than one hour.