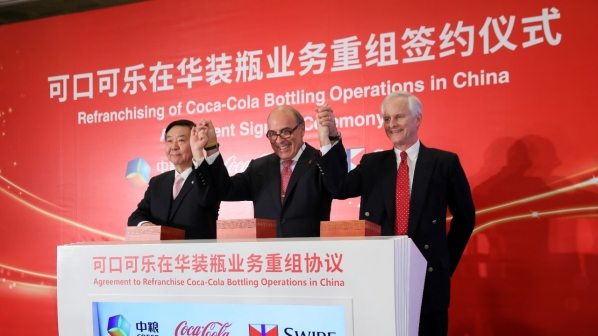 The transaction will result in a divide of the Coca-Cola’s bottling system in China between the two franchise partners – COFCO and Swire.

“By refranchising all our Company-owned bottling operations in China to strong local partners, we position these companies to leverage greater scale, capability and efficiency throughout China to invest for growth and deliver improved service to customers and consumers in a fast-changing marketplace,” said Muhtar Kent, Chairman and CEO, The Coca-Cola Company.

As Coca-Cola’s third-largest market by volume, China represents a significant long-term growth opportunity for The Coca-Cola Company and its bottling system.

The Coca-Cola system in China is currently investing US$4 billion locally for future growth from 2015 to 2017, building on US$9 billion of investments made in the market since 1979.

In February 2016, The Coca-Cola Company announced a non-binding letter of intent to negotiate the refranchising of its bottling operations with existing partners, COFCO and Swire.

Until the transaction closes, all bottling plants and customer relationships will continue to operate as normal under current bottling ownership.