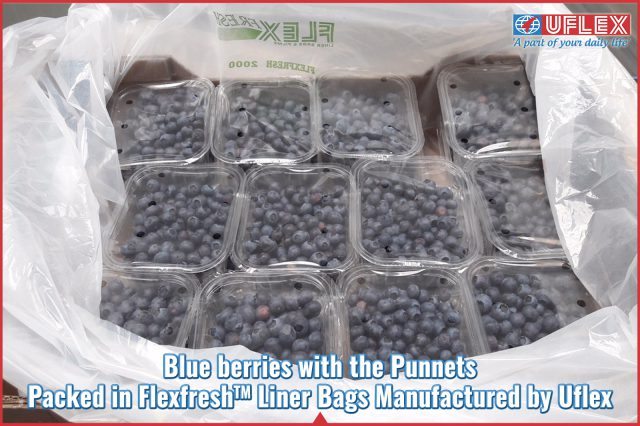 After a 7-week test on the sea, loose blueberries resulted in an average weight loss of 19.96%, while those packed in Flexfresh shed 0.76% weight, thus registering a 96% reduction in weight loss upon arrival.

Flexfresh works on the principle of active modified atmospheric packaging (AMAP) – a solution that Uflex has launched globally in collaboration with the Perfotec B.V of The Netherlands.

While Flexfresh is a patent protected polymeric packaging film manufactured by Uflex for packing fresh fruits, vegetables and flowers; Perfotec supplies the Fast Respiration meter for ascertaining the respiration rate of the fresh produce and the associated software for calculating the required film permeability.

The Perfotec laser system subsequently uses this information to adapt the permeability of the film offered by Uflex through micro perforations.

This solution maintains the ideal oxygen and carbon dioxide levels inside the liner bags to maintain freshness and extend shelf life of the product.

In the trials, the retail chain wanted to ascertain if it was possible to ship and store the soft fruit (blueberry) for seven weeks in a Flexfresh liner bag.

The blueberries were packed in punnets with and without Flexfresh liner bags.

In a separate lot, loose blueberries were packed with and without Flexfresh liner bags.

After seven weeks the blueberries in the liner bags were found to be good, firm, crunchy and tasty.

However those packed in a controlled ambience had most of them collapsed and moldy.

Punnets with and without liner bags resulted in 0.76% and 2.56% weight loss respectively.

These figures are significantly lower than the 19.96% weight loss registered in case of loose blueberries.

The punnets that were not using liner bag still showed the same quality problems like moldy blueberries.