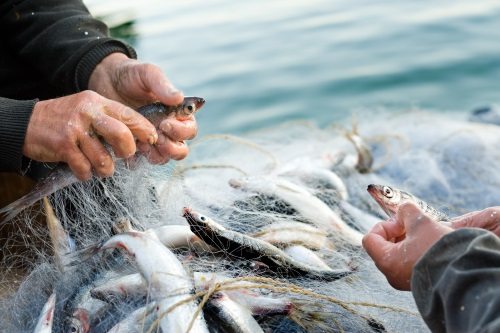 Just like turkeys for Thanksgiving in the US, I was told by my colleagues in Singapore that the equivalent of celebratory food for Lunar New Year is “Yusheng”.

With my curiosity piqued, I summoned the help of the Internet and, to my pleasant surprise, found out some very interesting information about the Chinese New Year dish.

What is more intriguing to my finding is that guests at the dinner table would be invited to “lo hei”, meaning “rise to prosperity”, and toss the ingredients into the air.

Chinese believe that the higher you toss, the better luck you will have for the upcoming year.

While the modern take on Yusheng introduces new ingredients such as abalone, scallops, or even wagyu beef to add zing to the Lunar New Year appetizer dish, the traditional main ingredient remains the salmon fish, which symbolizes abundance.

Singapore is one of the biggest seafood consumers in Asia Pacific, consuming approximately around 100,000 tons every year.

In 2013, Singapore residents consumed about 54,000 tons of live and chilled fish, of which more than 90% were imported.

As the Lunar New Year festivities typically run for several days, a spike in fish consumption is anticipated.

Thus, it is of importance that consumers know where the fish come from and what are the procedures undertaken to make sure it is safe to eat.

In this article, SCIEX hopes to cast some light on the various food safety issues associated with fish products and how testing is done in the lab. Fish, in comparison to other meat and dairy products, are relatively low-risk food.

Nevertheless, there are several food safety hazards that can be associated with fish or seafood products, among those are the prominent issues relating to microbial pathogens in certain seafood, overuse of pesticides or chemicals in fish farming, and mislabeling of fish products in order to command higher prices among consumers, to name a few.

For starters, microbial pathogens like bacteria and viruses can cause illnesses or produce toxins that are not cleansed during cooking.

In the seafood category, shellfish like oysters, clams, mussels, and scallops can filter and accumulate any microbes that are present in the waters in which they live.

As a result, they are more likely to contain pathogens that could cause foodborne illness.

There have been some concerns about whether fish are safe to consume due to the vestigial amounts of chemicals that may be found in fish tissue.

In 2012, Southeast Asian Fisheries Development Centre (SEAFDEC) forewarned the industry that there have been too many unnecessary chemicals and drugs used to “enhance fish culture” and to “control diseases”, which might lead to compromised safety and quality of aquaculture products.

Low levels of natural and man-made chemicals are in the water in which fish live, and they can accumulate in the fish tissue.

Among these, mercury is found in large fishes like sharks, swordfish and large tunas.

Mercury comes from two major sources: the natural element found in environment and industrial air pollution. Mercury from the air can build up in streams, rivers, lakes, and the ocean.

It then undergoes a chemical process catalyzed by various bacteria in the water and transforms into methylmercury. Once consumed, methylmercury accumulates in a fish’s system, and enter our systems subsequently when we eat fish.

Man-made pollutants are often found in fish products as well.

For example, polychlorinated biphenyls (PCBs) are an agglomeration of more than 200 chemical compounds and have been widely used as coolants and lubricants in transformers and other electrical equipment.

Despite imposing a ban on the use of PCBs in 1979, its residues are extremely resilient in the environment and biomagnify within the food chain.

The same as methylmercury, it slowly gathers in fish as it is consumed.

Chlordane is also a man-made chemical that was used as a pesticide on agricultural crops, lawns, and gardens.

The use of chlordane in Singapore was banned in 1999, followed by some other Southeast Asian countries.

It has the same biomagnifying quality as PCBs.

Pesticides are widely used in aquaculture as well and people are exposed to low levels through their diet.

Ongoing exposure to pesticides can cause failure of the immune system, with children particularly susceptible to this.

Currently AVA is running several monitoring programs on a regular basis on all imported meat and fish products. Within the walls of the testing laboratories, scientists are conducting various testing on fish products to ensure they are safe to eat.

Under normal circumstances, scientists know beforehand what they are looking for in a particular test.

For instance, they could be searching for and aiming to quantify certain antibiotics, pathogens, or contaminants present in fish products, hence determine if the amount is pursuant to the standards set by AVA.

In some cases, scientists are unaware what contaminants or adulterants might be found in a given sample prior to the tests.

With the right technologies and expertise, laboratories would be able to successfully identify what they are looking for in both circumstances.

Utilizing liquid chromatography with tandem mass spectrometry (LC-MS/MS) to analyze for antibiotic residues or contaminants in a food sample offers many benefits to routine food testing labs, including the ability to screen multiple compounds at once, the selectivity to meet regulatory guidelines, and the sensitivity to reduce sample preparation time to get the results faster.

The key to the technology for all food screening applications lies in its ability to amass full scan data, or acquire information on every chemical compound in the sample, and by using intelligent software, lab scientists are able to transform these data into sensible information.

In the specific case of testing for malachite green (MG), an organic compound often used in fish farms as prevention against fungus and infection despite having an adverse effect on humans, one LC-MS/MS instrument would be able to come to the aid to detect MG and identify how much of it is in the fish sample in mere minutes.

The steps are straightforward.

Most of the time, it starts with sample preparation where fish samples are collected and properly prepared before they are slotted to the instrument.

Since LC-MS/MS detects chemical contaminants based on their distinct chemical masses, a deuterated internal standard (in the case of MG, that standard is D5-LMG) is added at a known concentration during sample preparation to monitor sample recovery and analysis performance.

The sample would then be placed in an LC-MS/MS instrument for testing.

Each chemical contaminant of interest is searched based on its distinct mass as well as by unique fragments of that chemical compound (MS/MS), making the detection highly selective to the chemical of interest.

Figure 1 lists various chemical compounds and their unique fragments (MS/MS) that are typically screened for in a MG assay, including metabolites and other relevant dye compounds.

If the lab personnel are looking for unknown compounds in a fish product sample, there is one additional step to the process.

Once the fish sample is surveyed by the LC-MS/MS system, the data are processed using a smart software interface that screens those data against large chemical databases, while also comparing to control samples, to effectively identify any residues that might be present in the sample.

Ultimately, LC-MS/MS is a powerful analytical tool that enables laboratories to selectively and sensitively screen for both known and unknown chemical contaminations in food to safeguard the public from exposure to toxins in the food we eat.

It is important to highlight that there have been some advances made in scientific technology that could aid fish products testing hence further cement food safety.

As fish products continue to gain popularity in Southeast Asia, LC/MS/MS technology provides tools for all parties involved in the process, from fish farmers, distributors, regulators to government or private testing bodies, to identify whether the fish products are safe to consume.